Watch the video of the opening on

Niam Jain specializes in Abstract Art. At the of age of 15 Niam is being recognized all over North America from collectors for his unique talents. Niam has autism and limited speech. He paints in layers and each layer expresses a thought or emotion with the entire painting telling a story. As he paints, the colours explode in his paintings, bursting onto the canvas in bold dabs and brushstrokes, at times with complete abstract abandon. With astounding pictorial intuition, Niam composes works that inspire and intrigue. He invites the viewer into a vibrant world of unrestraint abandon, where the viewer is lost in the emotions of the painting. Although, Niam lacks fluent speech he reminds us a canvas is a medium of ultimate expression.

Niam Jain is the youngest recipient of the ANOKHI Awards 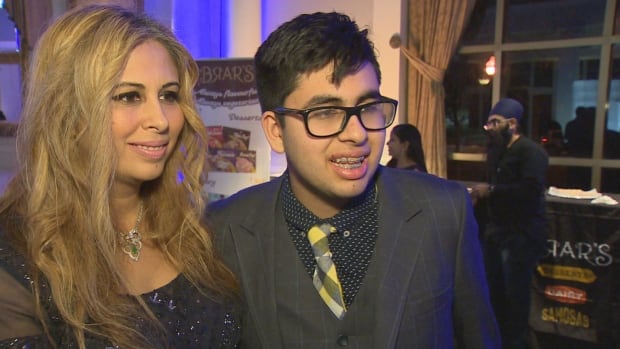 At 14, Toronto artist Niam Jain became the youngest recipient of the ANOKHI Awards, an honour his mother Nina says looks beyond the fact that he has autism. (Spencer Gallichan-Lowe/CBC)

A 14-year-old Toronto boy with autism has crafted a name for himself in the art world despite only picking up a paintbrush two years ago.

Niam Jain became the youngest recipient of the ANOKHI Awards on Tuesday night. The gala event held in Liberty Village recognizes the achievements of dozens of people from the South Asian community.

“Really, the award is showcasing and highlighting Niam’s potential and what he’s accomplished and, really not highlighting the fact that he has autism, but really looking at him as an individual.” 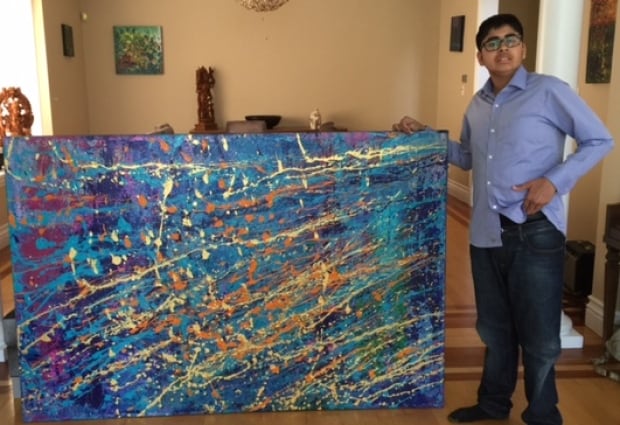 Niam Jain stands beside an unnamed painting, one of his biggest. He worked on this piece for almost six months. (Corinne Seminoff/CBC)

In the summer of 2015, she first brought her son some art supplies to give him something to do. She never thought it would lead to a passion and a burgeoning career.

Jain was diagnosed with autism spectrum disorder at the age of two. He has minimal speech and comprehension skills and uses technology to communicate. But give him a brush and some paint and he communicates with ease.

Since then, Jain’s mother estimates he has sold more than 50 paintings worldwide and earned some $50,000.

“He’s having sold-out shows and he’s not able to produce the artwork as fast as the demand is,” she said.

“He’s independent now financially, he’s created a business, he’s paying tax, he’s a contributing member of society, and as a parent that’s more than you could ask,” she said.

He has a reason to get up in the morning and he has a passion … Many people don’t even find that, and he has found it.” 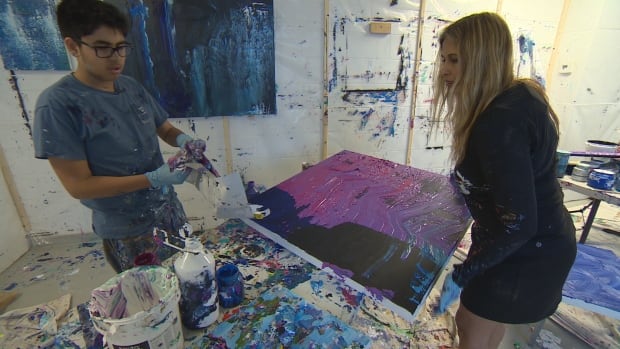 Niam Jain, 14, and his mom, Nina, in the studio. Jain has sold more than 50 paintings and the demand keeps growing. (CBC)

Looking at the artwork of Niam Jain, one would be hard-pressed to define its creator. There is great maturity in the use of material, as well as an audacious approach to colour and composition. Hints of Abstract Expressionism, a touch of Jackson Pollock perhaps, maybe Riopelle, the references are many. Yet it would be a great disservice to these artists to group them in this way, and most of all to Niam Jain.

To be placed on the shoulders of such giants in the history of art, and to do it at the tender age of twelve, is a true accomplishment. It becomes even more of a tour de force when one takes into account that Jain suffers from autism. But before any thoughts of pity or doubt arise, the artist himself dispels the myth, attributing his creativity to that very affliction. For rather than hinder his expression, it has fuelled his imagination, releasing, freeing his amazing creative impulse.

If art brut, or outsider art, comes to mind when discussing Jain, it is with reverence not disdain. Coined by the great French artist Jean Dubuffet (1901-1985), it defines “raw art”, one created outside the constraints of traditional aesthetics. Dubuffet himself eschewed such limitations, opting for a more authentic approach to making art.

And what could be more authentic than images borne of an unencumbered mind, of an unshackled, if unusual, spirit. Jain paints as if he were channelling some kind of otherworldly energy. The colours explode in his paintings, bursting onto the canvas in bold dabs and brushstrokes, at times with complete abstract abandon, at other grouping into geometric forms and patterns. Like in the works of surrealist Max Ernst, and others who employed automatism in their creative process, Jain seems to be accessing material from the subconscious, without guile or pretence.

With astounding pictorial intuition, this young artist composes works that inspire and intrigue. He invites the viewer into a vibrant world of unrestraint abandon, infused with the pure joy of painting.  Jain possesses an innate understanding of the material, adapting to the demands of each medium – be it acrylic on canvas, wood or linen, or prints.

It is, nevertheless, disconcerting, and ultimately futile, to try and reconcile the maturity of the artwork with the tender age, and personal development of its creator. On his colourful website, Jain breaks his creative process into four simple steps that sum it up probably for 99% of all artists.  Get paint, prepare, start painting, stop painting. It is what remains after the final phase that sets them all apart. When Jain finishes his painting, the result defies the stance.  The mind boggles thinking what the future holds for this supremely talented and unique artist.

Get exclusive news in your inbox

This website uses cookies to improve your experience while you navigate through the website. Out of these, the cookies that are categorized as necessary are stored on your browser as they are essential for the working of basic functionalities of the website. We also use third-party cookies that help us analyze and understand how you use this website. These cookies will be stored in your browser only with your consent. You also have the option to opt-out of these cookies. But opting out of some of these cookies may affect your browsing experience.
Necessary Always Enabled
Necessary cookies are absolutely essential for the website to function properly. This category only includes cookies that ensures basic functionalities and security features of the website. These cookies do not store any personal information.
Non-necessary
Any cookies that may not be particularly necessary for the website to function and is used specifically to collect user personal data via analytics, ads, other embedded contents are termed as non-necessary cookies. It is mandatory to procure user consent prior to running these cookies on your website.
SAVE & ACCEPT